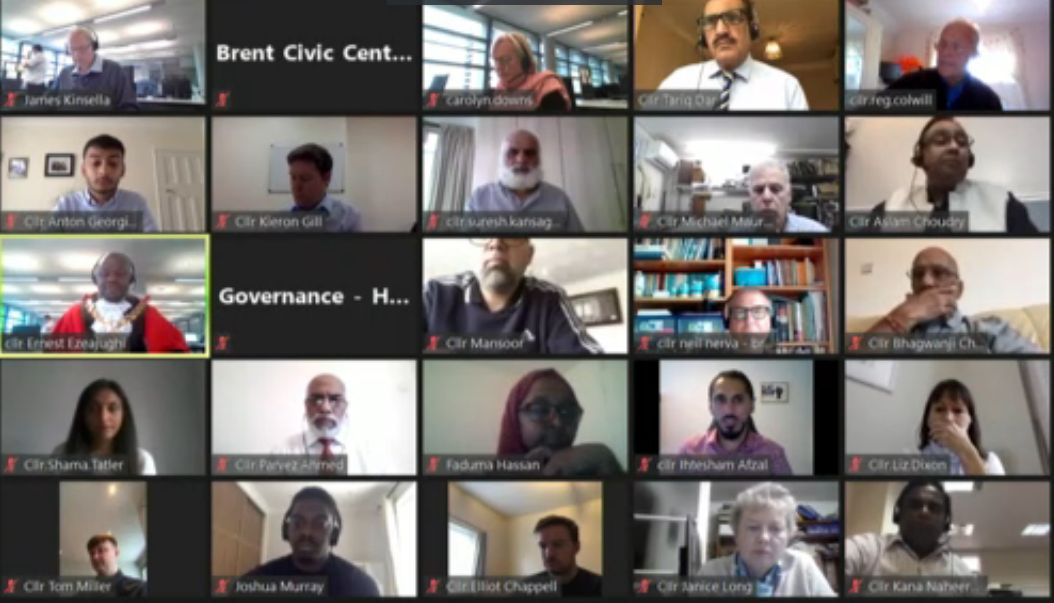 One week ago, several councillors called for the council to convene an extraordinary meeting, following the implementation of Brent Healthy Neighbourhoods as part of the council’s Active Travel Programme as published in June this year.

Representing Brent Cycling Campaign and residents who regularly convey to us their hope that those measures will be allowed to continue the full trial, our ride coordinator Charlie Fernandes, made the following deputation:

I speak as a representative of Brent Cycling Campaign, a campaign to enable active travel, cycling and walking and as a local resident.

I also speak as a voice for the many local residents that regularly approach us. They express they WANT their neighbourhoods to be healthy low traffic neighbourhoods. With fewer cars on the road during the early lockdown months, people saw what was possible.

So I thank Brent Council for introducing low traffic neighbourhoods (LTNs) during these difficult times. Residents are telling us they want to see these LTNs become fully operational, and they want more LTNs, and they ask us to push the council to do so.

I will now address (1) the consultation process, (2) the urgency, (3) it’s a question of social justice, and (4) the strategic vision.

1. The process. Some have raised concerns about lack of consultation.
Well, the usual pre-consultation method was not working. Proposals may not be plainly obvious to residents when appearing in technical drawings and writing. And however it’s communicated, the actual effects and benefits cannot be realised that way.

Consultations generally get got low engagement, with the louder voices resulting in a very weak compromise, or just giving up and keeping the status quo. Trialling schemes are a natural means to experiment, demonstrating in real life, with sufficient time for people to adapt and see the benefits. Adjustments can still be made during the trial.

2. The urgency. Perhaps you’re thinking: We’ve got a pandemic on. So why the urgency to enable alternatives to cars right now? Well, Brent, with lots of public transport connections, is highly dependent on public transport. But we’re told to avoid public transport as much as possible. So how can people get around?

Half of households in Brent have at lest one car. So I address this in two halves. First, those who have a car. We’re already around pre-lockdown traffic levels. After furlough ends, car use will climb much higher, while public transport continues to be restricted. Road gridlock will quickly become more severe.

And now, the half of Brent residents that do NOT have a car. They’re much more dependent on public transport This is very much the poorer half. Brent has amongst the worst levels of pollution. The polluted areas are also poorer areas. Brent has amongst the highest rates of obesity and diabetes, linked with inactivity and poverty.

So now on point 3. It’s a matter of social justice that everyone should be enabled to get around their local neighbourhood safely and participate in their local communities as vibrantly as anyone else.

By LTNs restricting rat-running, it leads to our neighbourhoods and inside our homes having better air quality, in quiet pleasant healthier neighbourhoods. Older people, disabled people, children, vulnerable people, those that are less mobile, whatever their background, everyone, can more easily roam and make better use of their surroundings. The neighbourhood becomes more of a community space to engage with our neighbours.

A month ago, I attended a local street meeting on Glendale Gardens road. It was only feasible to safely use this space while the barriers were in place preventing through-traffic.

4. The vision: And while our love grows for LTNs, they’re only part of the solution. People need to be able to travel from their Healthy Low Traffic Neighbourhoods to low traffic town centres and other destinations.
Protected cycle lanes on main roads, provide the connectors. Altogether this creates an environment that truly enables active travel.
It leads to attractive scenes such as children cycling in safety to school.
More women cycling, people whatever their background, age or ability, cycling because their local environment has been made safe and inviting for them to.

But they’re not just attractive nice things to see. They’re real people for whom simple changes to their environment has enabled them to lead lifestyles that enhance their physical health and mental health
And by switching to avoid using cars, or using cars less, they are reducing the negative impact of cars on others, improving air quality, making the roads safer. And reducing congestion – which in turn also makes it easier for those that are unable to avoid using their cars

The urgency and for the sake of the residents of Brent, the calling is now for progressive active travel.

I thank you for listening. I will conclude with the following point: While the pandemic has made this a memorable moment, let’s craft it so that in future years, the residents of Brent will look back and say, those were the councillors that gave us a healthier neighbourhood

Three petitioners also spoke, opposing the Brent Active Travel programme in the Preston area and the Brent Healthy Neighbourhoods proposals in Kensal, Brondesbury & Queen’s Park, and in Kilburn. The two last proposals are not yet public or open to consultation.

The amended motion was carried with no vote against and three abstentions from the Conservative group.

You can view the full meeting from here.