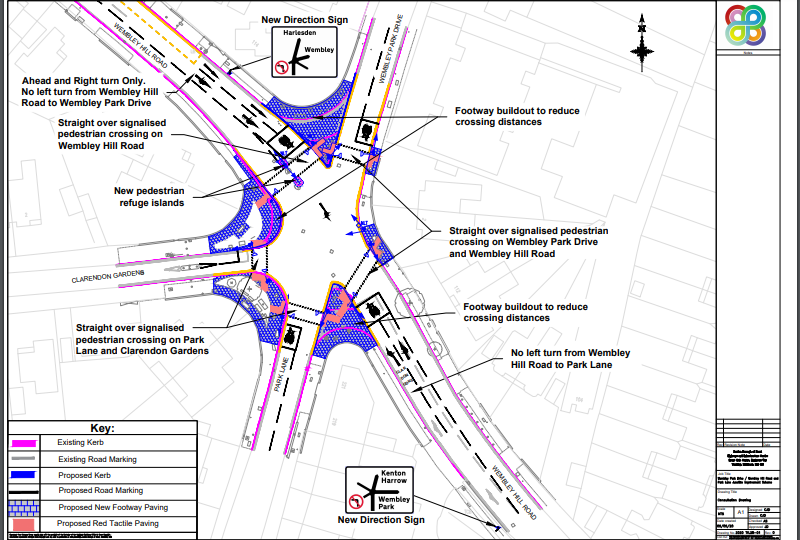 This is the response from Brent Cycling Campaign (first posted on 24 May 2021, to the above consultation (this section of the council’s website has been transferred to this new platform and there is no longer access to previous consultations…). However, the council is consulting again and this is the new link.

[22/09/2021 – UPDATE: We received a response from officers, on Tuesday 21 September – added in bold and italic below. Scroll down to ‘Summary’. These are the exact words used. You can draw your own conclusions as to whether or not Brent Council is committed to improving conditions for “all” road users as claimed. However, based on this, you would be forgiven to think that 1/the assumption is that everybody drives everywhere, all the time, and 2/Advanced Stop Lines are not only a suitable junction treatment but the only one available… In 2021. After Gear Change and LTN 1/20].

OFFICER’S RESPONSE: The scheme proposes to introduce safer and protected crossing facilities for pedestrians and upgrade the existing traffic signals to enhance the operation of this junction by coordination with adjacent traffic signals in the area for optimum operation and minimise congestion.

OFFICER’S RESPONSE: The proposed scheme will not have a significant impact on the overall capacity of this junction. The improved signal coordination and revised signal timings (including a pedestrian phase on all arms) will lead to a slight reduction in capacity at peak times.

OFFICER’S RESPONSE: This junction is a critical intersection, located centrally to the Wembley High Road, Wembley Park Station, Wembley Stadium and London Designers Outlet. Also within a mixed land use including the residential, commercial and educational amenities in close vicinity of this junction. The junction layout and traffic control with protected pedestrian crossing facility was in need of a total upgrade and improvement. The proposed improvements will not only provide safer pedestrian crossing facility but will also improve overall junction operation with revised method of control, signal timings and close coordination with other signal controlled junction in the area. This will benefit for a better and improved traffic control for this area.

OFFICER’S RESPONSE: The proposed scheme retains all advance stop lines for cycles at this junction.

OFFICER’S RESPONSE: This junction provides for and has been designed with all road users in mind. It is for the mutual benefit of all road users alike. The proposed scheme is not designed for the benefit of one specific mode of transport.

OFFICER’S RESPONSE: This option was also considered but found not suitable as it would lead to much longer diversions and inconvenience to the local residents of Clarendon Gardens.

OFFICER’S RESPONSE: The above suggestions are outside the area and scope and design brief of this junction improvement scheme.