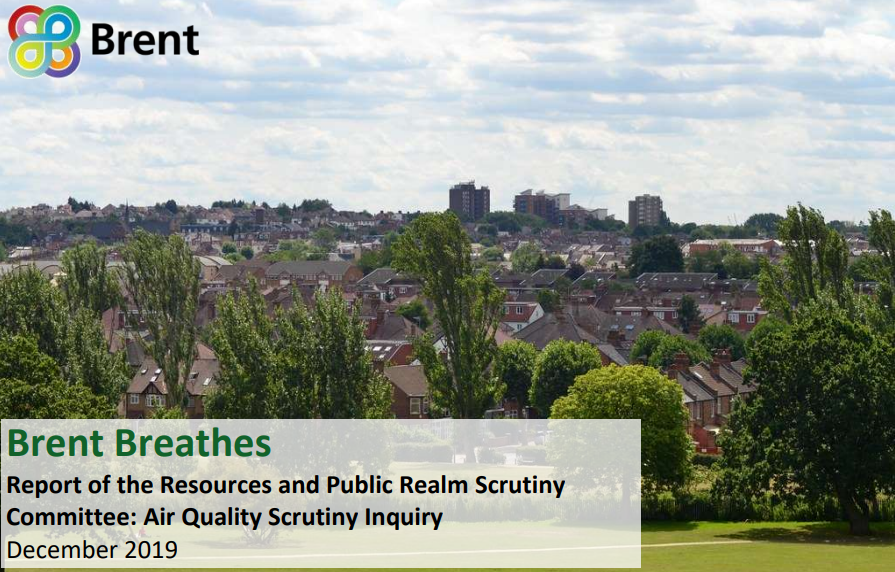 A newly-published inquiry report has called for a “step-change” in the way the Council tackles air pollution, and has recommended they take a range of further steps to speed up improvements in air quality in Brent.

“Air pollution is the single greatest environmental risk to ill health in the UK, and the fourth greatest threat to public health after cancer, heart disease and obesity. Four of the ten most polluted areas of London are in this borough.

“I know that the whole Council recognises that this is a severe and much-neglected public health crisis, and for the sake of current and future generations we must redouble our efforts to address this problem.

“This report sets out a clear vision to bring every neighbourhood in Brent within healthy, World Health Organisation limits for air quality. Our ten recommendations build on the successful steps already taken by the Council, including our recent declaration of a climate emergency. If adopted, it would help make Brent a leading borough in the steps we are taking to improve air quality and tackle the climate crisis.”

Clean Air for Brent and Brent Cycling Campaign have been proud to serve on the inquiry, which was established by Brent Council’s Resources and Public Realm Scrutiny Committee in July 2019.

It has been chaired by Labour Councillor for Sudbury, Cllr Thomas Stephens, alongside a task group of six fellow backbench Councillors and the two co-opted organisations.

The inquiry has spent the past six months reviewing the available evidence, commissioning reports from the Council and holding oral hearings with key figures – including academic experts, Transport for London and private sector organisations which impact air quality in the borough, such as the Football Association.

The inquiry’s 113-page report was published on Thursday 28 November, and makes ten wide-ranging recommendations. It also contains a detailed analysis of current air pollution issues in Brent, drawing together the latest evidence from a range of sources.

You can read the full report here or flick through below:


Amongst the report’s recommendations, it calls on Brent Council to:

1. Set targets to meet more stringent World Health Organisation limits on air quality, and address inequality in air quality between parts of Brent. Like most Local Authorities, and like the national Government, the Council currently only has targets to meet the weaker European Union legal limits on air quality. It calls on the Council to change this, and follow other Councils in committing to meet the more stringent air pollution limits set by the WHO.

2. Introduce a clear strategy to tackle air pollution caused by non-resident car usage.  It calls on the Council to agree a cap on the number of non-resident cars travelling Wembley on event days, and impose a diesel surcharge for private car parks for non-residents.

3. Make ‘healthy streets’ a central political and corporate priority in Brent. Where local residents desire it, the Council should actively work with neighbourhoods to promote greener, healthier streets which promote active travel. The report also sets out a range of areas where the Council could play a more active role in lobbying for better public transport accessibility and walking and cycling infrastructure in Brent.

4. Expand measures to tackle air pollution in schools. It calls on the Council to expand the successful School Streets initiative – currently being piloted in two Brent Primary schools – and work with every school in the borough to explore School Streets.

5. Spearhead a public awareness campaign on air quality. Amongst other things, it calls on the Council to broaden and intensify the fight against engine idling, equipping a much wider range of council staff and others to enforce idling laws.

The report also calls on the Council to lead by example, and minimise the air quality impact of its own policies. This includes by setting a clear timetable for greening its own cars and bin lorries; and ensuring its construction processes, including for footways, minimise impact on air pollution and the environment.

“Brent Cycling Campaign have long argued that reducing unnecessary motorised traffic is key to make our streets less polluted and ensure better public health, not only now but also for future generations. The potential for inclusive, sustainable and all-ability active travel is a trigger to better air quality and it will only be achievable when decision makers prioritise walking and cycling so it becomes the obvious choice.”

Joining the dots between transport, health and the environment is the only way to address the challenge of poor air quality and within the powers of Brent Council. The time to change is now and enabling modal shift from motor vehicles to active travel like cycling and walking is a relatively easy thing to do with political leadership. We certainly hope that the recommendations made will receive the considerations they deserve and make it to policy making. ”

Crucially, the scrutiny inquiry has called for the Council to establish a dedicated team of officers to drive forward these recommendations, with sole and specific responsibility of tackling air pollution and the environment across Brent.

“This report should lead to a step change in efforts to improve poor air quality in our Borough. We have been pleased to be involved with the inquiry for the last few months – the Group has engaged widely with experienced and expert witnesses in a thorough process that’s led to clear conclusions and common sense recommendations.
“We all need to do what we can to help clean up Brent’s air, especially for our children’s future. It’s extremely welcome to see our Council leading the way.”

The report has received full endorsement from the Council’s Resources and Public Realm Scrutiny Committee on Wednesday 4 December. It will now be sent to Cabinet to be considered for implementation in the New Year.