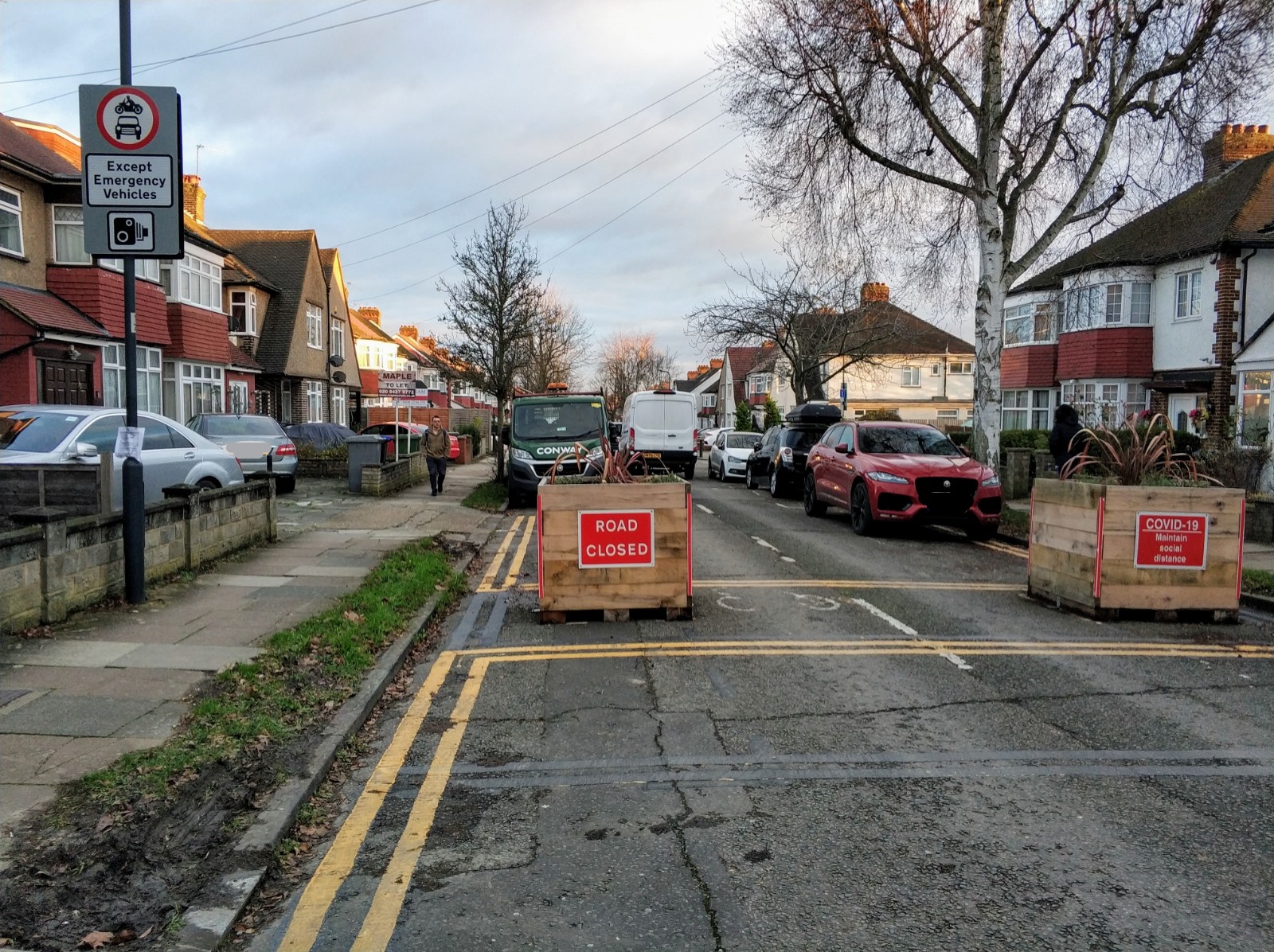 This is the response from Brent Cycling Campaign, the local group of London Cycling Campaign. We represent around 300 supporters (with around 200 paid-up members) and attempt to represent the interests of all who cycle or would like to cycle in NW London.

Overall, we support the scheme. We also have the following comments, regarding what we see as weaknesses and how to make it much stronger.

The consultation states that a lockable drop down bollard will allow emergency access vehicles to pass through.

None of the Preston area low traffic neighbourhood (LTN) filters – on Glendale Gdns, Thirlmere Gdns or Grasmere Ave – have ever had bollards installed.

Nor have we seen any form of enforcement. From the start, the temporary water barriers have always been shoved aside, with drivers routinely going through. This has been the case throughout the day, every day, the whole of the consultation and trial period 25th August 2020 to 28th February 2021.

Despite prohibitive traffic signs being in place, drivers have been told not to worry about going through, that there are no cameras, that they won’t get fined, even by councillors.

This surely has the effect of demeaning the value of prohibitive traffic signs and traffic management laws.

In this instance, there has been no real attempt to achieve the aims of an LTN, whether to remove through rat running traffic, nor to nudge local behaviour away from driving.

As a result, there has been no effective trial in place for the whole designated period.

Instead of using the trial period to engage with residents and trying to address their concerns, local ward councillors have promoted petitions calling for removal, despite the consultation. The much longer consultation period would have captured people’s concerns and enabled changes to the scheme fairly swiftly as these trials permit.

This is puzzling because there seems to have been a misunderstanding by those councillors as to what a trial was for and how it worked. On the 4th June, the council held an Active Travel Forum Meeting – Update on Covid-19 Transport Recovery Plan to which all Brent councillors were invited to, which was entirely dedicated to explaining everything.

The overall plan was subsequently posted on the council’s website in June 2020. This plan follows the mandate placed upon all UK’s local authorities by the Department for Transport in May (link). The result was that residents were left utterly confused and angry and misinformation filled the vacuum. Those who welcomed the scheme in principle but waited to see how the healthy neighbourhood would work in practice were left equally angry and badly let down by a total dysfunctional implementation. This is a great shame.

The design of the scheme

The scheme design has a major flaw, in that it fails to close a major rat run, specifically Carlton Ave East – Windermere Ave. This in turn magnifies delays to the 223 bus. All rat runs inside an LTN cell should be closed according to LTN principles.

We suggested this could be achieved in the design by removing the Thirlmere Gdns filter, and instead replacing it with a bus gate on Windermere Ave, between its junctions with Thirlmere Gdns and Rydal Gdns.

Other local issues regarding active travel

The council could explore reopening the route between Strathcona Rd (off Windermere Ave) and East Lane, through the business park, for cycling and walking only.

The council could liaise with Transport for London if necessary to remove or replace the barriers in the pathway that passes through South Kenton station. The barriers make it unnecessarily difficult or completely impossible for people using wheelchairs or mobility cycles to go through. Plus Northwick Park station has a similar problem with access. So such people may have no way around it.