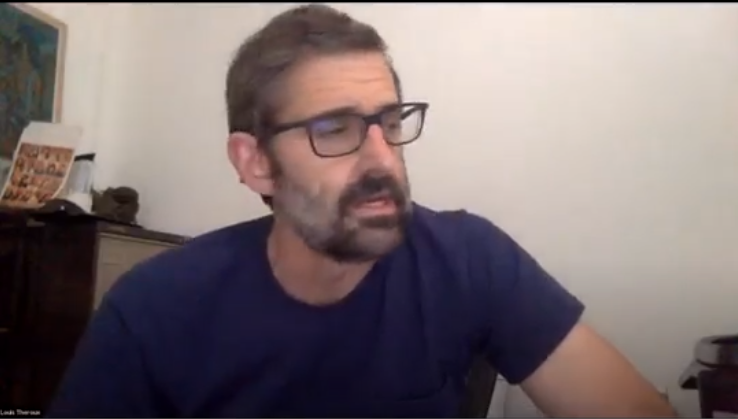 For the first time, our annual general meeting took place online as we are still observing distancing in the wake of Covid19.

We were lucky to have celebrity guest, Louis Theroux who kindly agreed to spend some time to chat to us about cycling in Brent. For the evening, we turned things around and ask him questions! Sharing his experience, and comparing cycling elsewhere, he described the benefits of having a ‘shabby’ bicycle in relation to risk of theft, and warned against becoming too worried or dependent on cycling-specific clothing. His message was: “get out there and just do it!”.

Within the context of Covid, Louis added that you couldn’t have a better socially distanced mode of transport than cycling and that we are seeing a sort of ‘renaissance’ for the humble bicycle.

On cycling in Brent, Louis acknowledged that the borough wasn’t “overly blessed with cycle lanes and racks provision” but for him, there are bits and pieces in places that mostly meet his needs, namely the Grand Union Canal, contraflows and what he called ‘virtual or notional’ lanes.

When thinking back to a time when cycling helped Louis in achieving what would have been otherwise difficult, he pointed out that it probably helped him achieved a “reasonable level of health”, which is important at all time but was particularly important when he was going through phases of not looking after himself as well as he perhaps should have done. Cycling also helped him making up for lost time when he slept through his alarm on the morning of his A-levels. Cycling ‘saved my bacon on quite a few occasions” Louis added.

Louis Theroux describes his cycling as functional and draws a lot of pleasure cycling around, especially in quieter parts, leaving behind the noise and cars of roads like Scrubbs Lane.

If you were unable to attend, you can see the slides used in the presentations here and watch the full recording of the meeting below.

Our Treasurer, Richard Sisson and Coordinator Sylvia Gauthereau then presented their respective annual report, showing what Brent Cycling Campaign have worked on for the past 12 months. A particular focus on the most recent events which precipitated the implementations of some of the measures we had been advocating for years.

These measures include protected cycle lanes on main roads, school streets and low traffic neighbourhoods on side streets. You can follow Covid19 specific news on our dedicated webpage. We also briefly touched upon the latest government’s walking and cycling policy, Gear Change with the long awaited local transport note LTN1/20 on cycling infrastructure design at national level.

Charlie Fernandes, our Rides Coordinator treated us to a virtual visit of some examples of reallocation of space in London and elsewhere in the country.

The AGM was also the opportunity to launch our brand new Cycle Buddies scheme. You can find out a bit more here. where you can sign up or alternatively, sign up there.

Thank you for your ongoing support! We hope that together we will finally seen Brent implement the changes that will make our borough safer and cleaner.

“The political will is there and we have a thick skin,” says Leader of the Council.