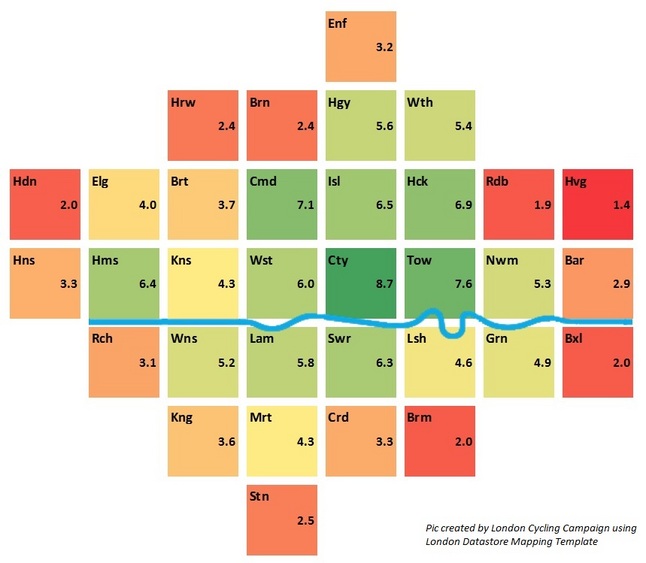 London Cycling Campaign has been collaborating over the last year with several other active travel campaigning groups on the first ever “London Boroughs Healthy Streets Scorecard”.

The health of Brent’s streets is falling behind other London Boroughs. A recent report by a coalition of transport organisations gave Brent a score of 3.7 out of 10 measured against the Mayor of London’s Healthy Streets approach. Brent falls well below the London average on a range of measures including: road safety; and number of people choosing to walk or cycle.

Brent Cycling Campaign welcomes this publication, and hopes that it will spur Brent Council into action. Brent urgently needs to act to prevent the inactivity crisis hitting the borough, Brent is 26th out of 33 in number of people choosing to walk regularly, and 3rd worst in number of people choosing to cycle. Of Brent’s 500 km of roads only 10 km have safe space for cycling (with a further 13 km away from roads, mostly in parks). In contrast London’s best performing boroughs have over 50 km of protected bike lanes, and more in the pipeline. Brent consistently fails to remove rat-running traffic from residential roads, coming 24th out of 33 for this easy to implement and highly effective measure.

We encourage Brent to look at the best ideas from within and beyond London. For example the 20 mph speed limit zones in neighbouring Camden and Hammersmith & Fulham, and the success in active travel of the recent Waltham Forest Liveable Neighbourhood. As a campaign for people who cycle or support cycling in Brent we know what the barriers to active lifestyles are. Brent is the borough Will Norman, the Mayor’s transport commissioner, described as one of the worst places [for cycling] he had ever cycled.