This isn’t about cycling 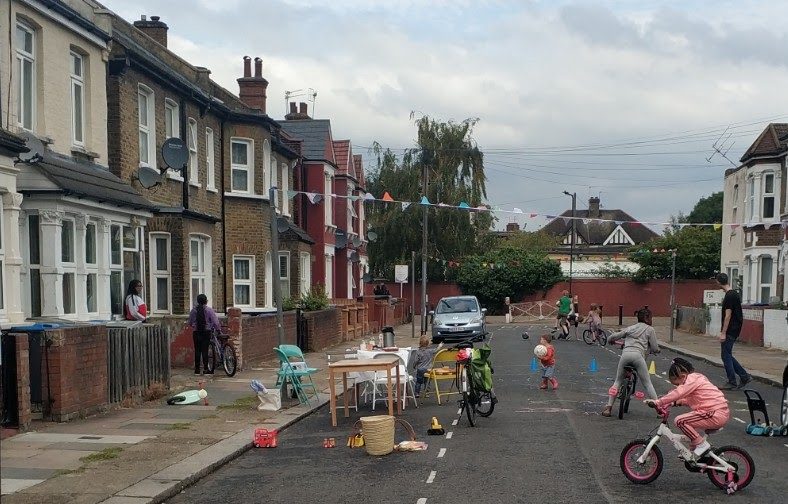 On Sunday 22 September, London saw more than 300 Play Streets, events across 15 borough and 27km of road turned into spaces, free of motor-traffic as the world celebrated Car-Free Day. Brent had 8 such events as residents applied to reclaim a portion of their road and turn them into a Play Streets or have a party.

We toured these places in Brent and met with the residents who organised them. The roads varied in sizes and activities taking place, however one thing they all had in common, was that children were playing freely on their street. This shouldn’t be an exceptional sight but sadly, it is.

Car free days have been happening all around the world on an ad-hoc basis for quite some time but it was in 2000 when calls for a global movement started to converge and the 22nd of September was set as the date for World Car Free Day. Bogotá is currently the city with the largest Car-Free Day with the event covering the entire city. They also have a car-free day every Sunday.

It’s like falling in love all over again; every Sunday without fail, and holidays too, the inhabitants of the car-choked, noise-filled, stressed-out city of Bogotá, 8,660 feet up in the thin air of the Andes, get to feel that the city belongs to them, and not to the 1,600,000 suicidal private cars, 50,000 homicidal taxis, nine thousand gasping buses, and some half-million demented motorcycles that otherwise pack into the buzzing capital of Colombia.

Whilst residents’ effort and determination, in spite of the mostly wet weather, is to be applauded, Brent Council is faring rather weakly against others boroughs especially within the context of the Climate Emergency the Council recently declared. Out of the 10 most polluted roads in London, 4 are in Brent. And yet, the only Council-led event held was on Coronet Parade a tiny slip road off Ealing Road which purpose is mostly for parking and loading during the week. Is this really as meaningful as closing an entire road? Incidentally, the Cycling Instructor stall was set up on the pavement whilst Rollapaluza fully embraced the spirit of Car Free Day and reclaimed the road.

Beyond written words, there is little evidence the Council is actively willing to implement measures to effectively reduce road danger, improve air quality and ensure people in Brent have the best chance to keep healthy. We know, they know what works. Evidence is plenty from around the world and increasingly, from the UK. There is an urgency to match the soundbites, coming out from well meaning Councillors, with actions.

There were 1,105 casualties in Brent in 2018, 5 of which fatal. Brent was identified as one of the boroughs with a higher than average rate of deaths or injuries per billion walking trips, with 793.

Let’s face it, a once a year Car-Free Day, as enjoyable and lovely as it was, is not what is going to repair our cities and communities from the damages brought upon us by decades of car-dominated urban design. That’s not what’s going to enable children cycling to school safely or walking without fear of being poisoned by adults’ vehicles; it’s not what’s going to enable the elderly to break from the isolation and dependence they sometimes suffer due to the lack of inclusive streets and pleasantness, and the narrow choice they are left with to transport themselves and keep their autonomy longer.

The Council needs to be bolder and more ambitious over its environmental commitments, and it needs to do that now. Throughout our tour, we met plenty of people who have local knowledge and know how people are moving around in their area. They pointed out some issues that have very simple solutions and yet big impact, but they remain to be addressed and in some cases even acknowledged.

We need political leadership that says enough is enough. It’s time to stop fretting about the fear of upsetting some quarters and get on with redressing the injustice that sees almost all public space geared towards one mode of transport, whilst most have to accommodate to the status-quo. Not doing so is accepting that people will suffer from poor health with illnesses and diseases that could be prevented. This is very short sighted and will represent a huge financial burden on the Council for years to come.

Children have the right to safe play, out on their street. A lot of Councillors would have been doing just that when growing up. A lot of them would have been walking to school, sometimes even independently. Why are Brent’s children today being denied this choice?

We must prioritising people at every level and these measures are within the reach of Council powers.

Not doing anything or doing very little, shying away from radical change, is no longer an option. Now, let’s stop imagine or re-imagine things and let’s start doing.